Tucked in the interlocking roads of Kota Damansara stands a vibrant 20-storey building that effortlessly brushes the skyline. It stands proud in this township with both sides flanked by residential and commercial buildings and also boasts a large golf course that complements the scenery with fresh greenery.

It is within this stellar building – named the Tropicana Gardens Office Tower – that SL+A Kuala Lumpur was tasked by the esteemed Tropicana Corporation Berhad to transform 100,000 square feet worth of space into an office that embodied a sense of calm with a touch of luxury.

With that intention in mind, our designers actively took inspiration from the peaceful Zen Gardens for the beautiful simplicity which is simultaneously conducive to meditation due to its walled-in space.

The SL+A team delivered on all aspects – ensuring that the project met requirements specifically tailored to the Tropicana Gardens Office Tower. This resulted in each level and room of the project with recurring design motifs utilizing stone, white gravel, water, bamboo and leaves for a uniform aesthetic that was functional and visually stunning.

For instance, the Main Gallery has many striking features meant to symbolise different aspects of a Zen Garden. From the grey walls meant to represent stone to the mirrors and timber that mimic elements of water and bamboo respectively, there is not one design choice in the room that was not deliberate in its symbolism.

In fact, even the differing greys and unique pattern of the floor was selected purposefully, as it is meant to represent the swirls and ripples found in the white gravel of Zen Gardens. It is no wonder then, that there is a serene sense of tranquillity in this atmosphere – the patterns in the gravel also mimic the wonderful soothing rhythm of ocean waves. 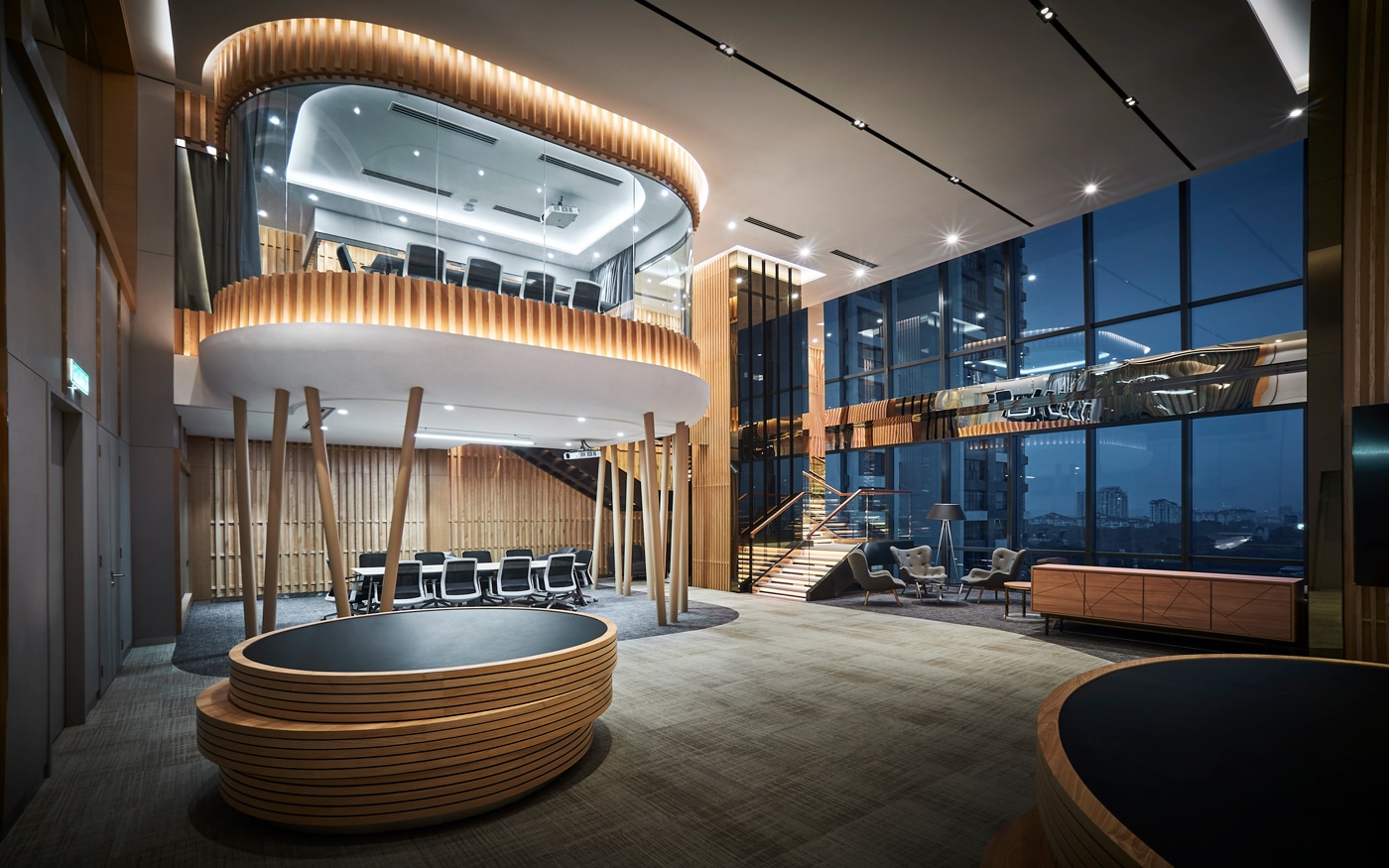 Such deliberate choices are also present in one of the most stunning rooms aptly named the Gallery Showcase, which proudly presents a meeting room atop of sturdy pillars. As practical as it is beautiful, the meeting room mimics lily pads and their roots, creating a floating on water sensation while the space remains suspended in air.

Of course, the project does not shy away from having more subtle and subdued designs as shown in how the Meeting Rooms are more standard in the layout choices. The designers made very creative decisions to have each Meeting Room feature leaf patterns as part of the ceiling design, helping to slightly and tastefully differentiate each of the rooms from one another.

The floor to ceiling windows in the space offer an almost panoramic view of the golf course, surrounding buildings and the lake. The Tropicana Gardens Office Tower is a superior example of how to transcend the diverse needs and lifestyle amenities of an urban population. The Silver Green Building Initiative rating awarded solidifies the commitment to adopting building practices that support resource-efficient, healthier and environmentally sustainable future. 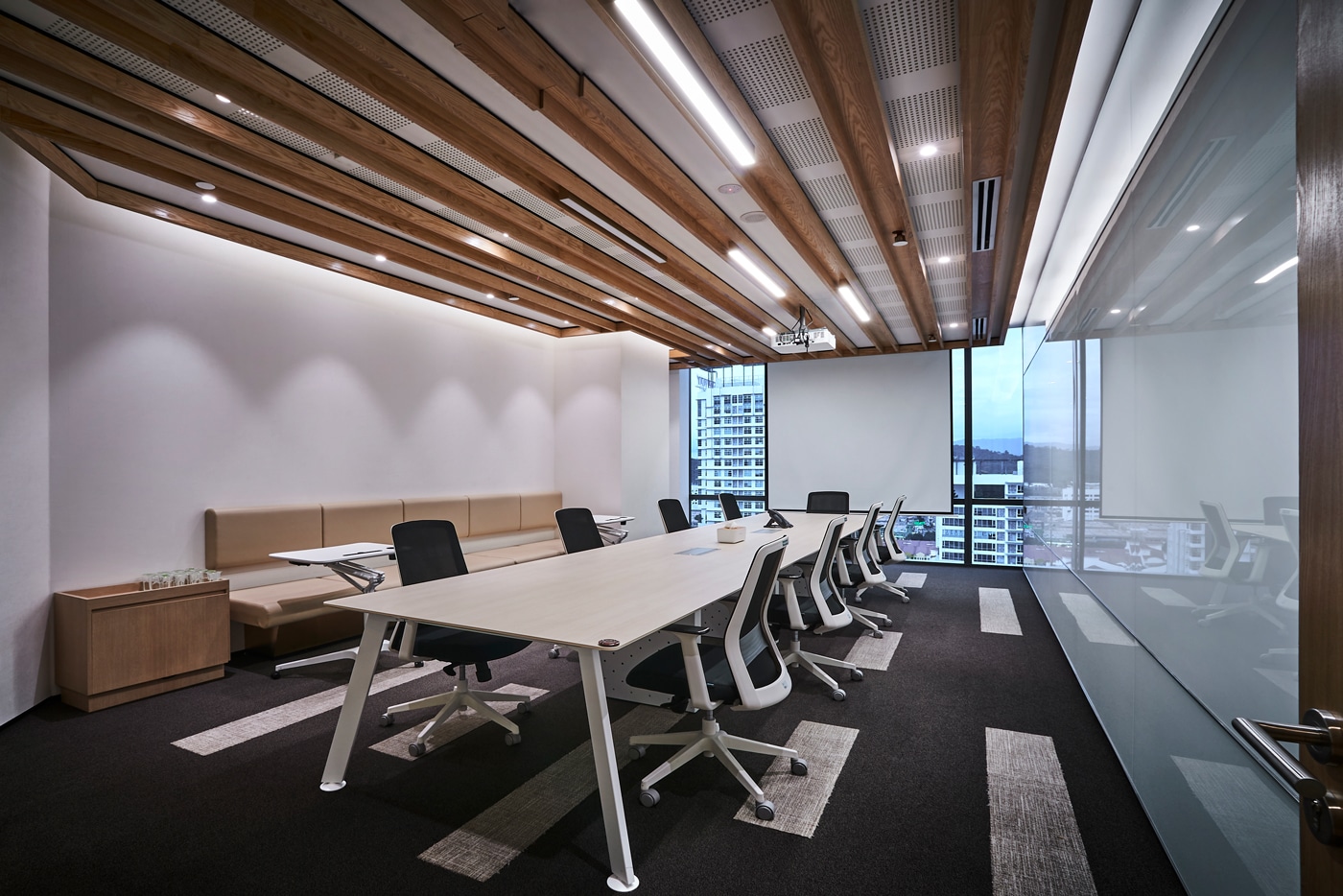 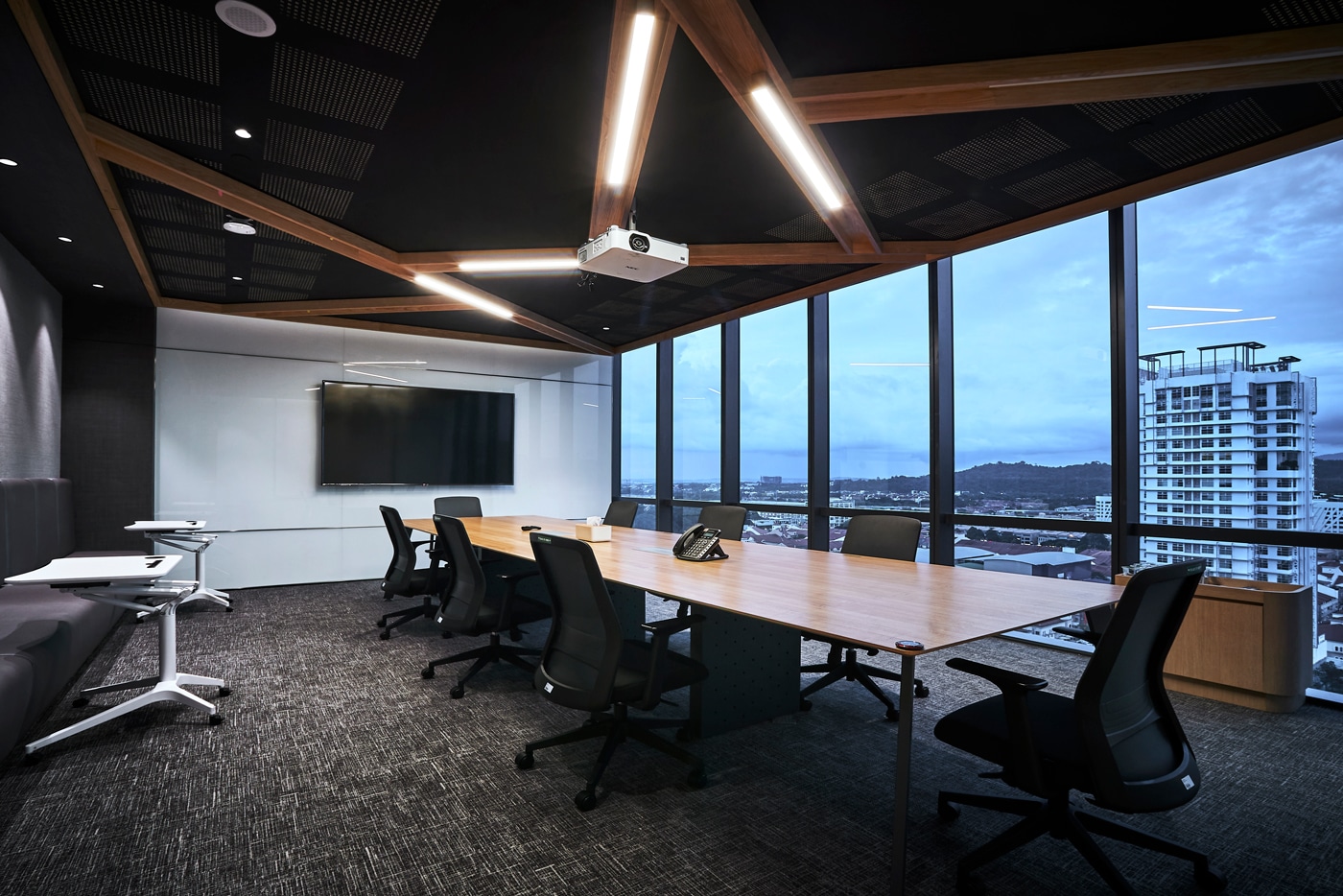 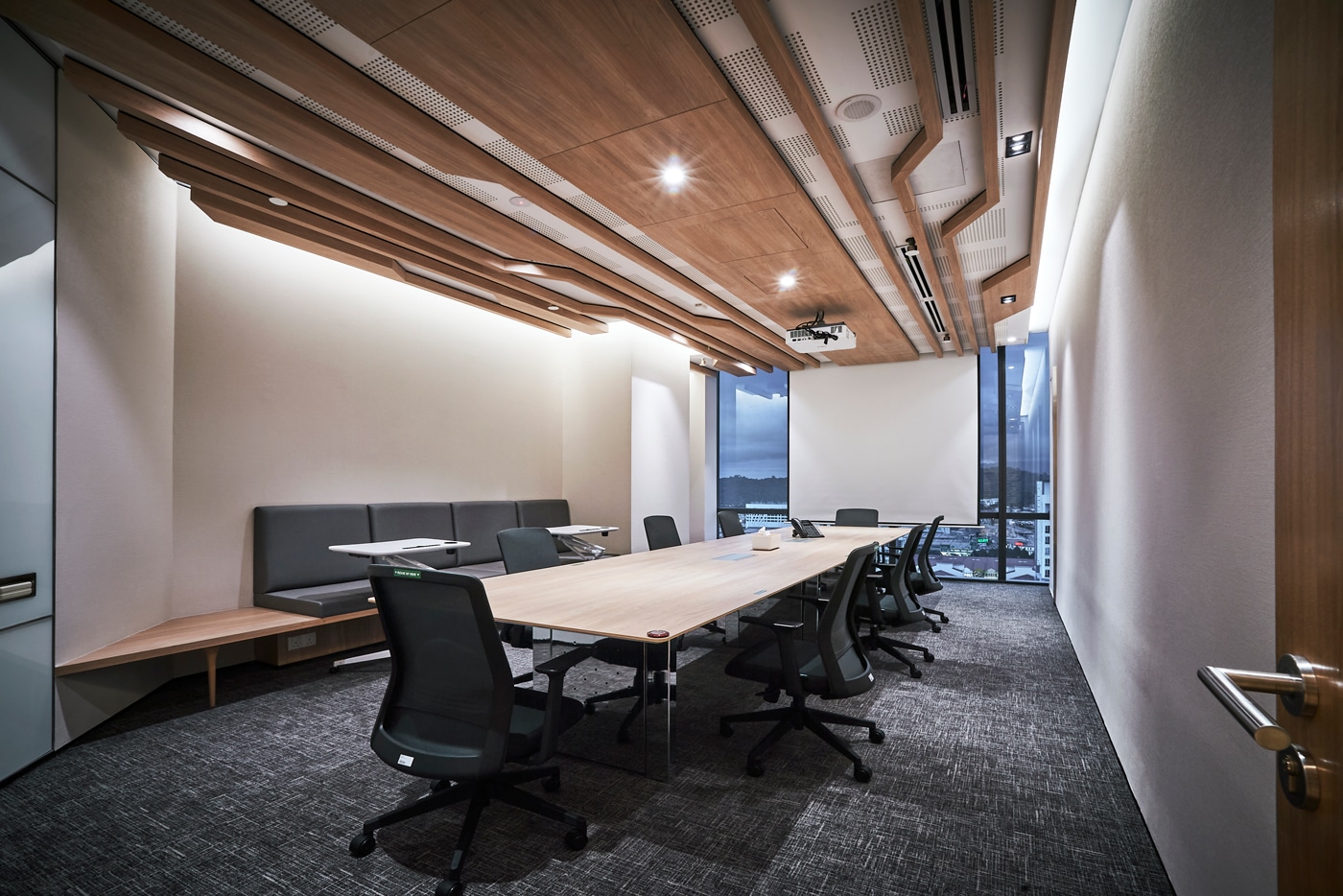 Regardless of grand or subdued, the culmination of this 3-year project was incredibly successful in its mission to provide mystery and surprise for even the simplest of rooms. The connectivity and convenience provided is a shining example of how we can build for a bright and successful future. 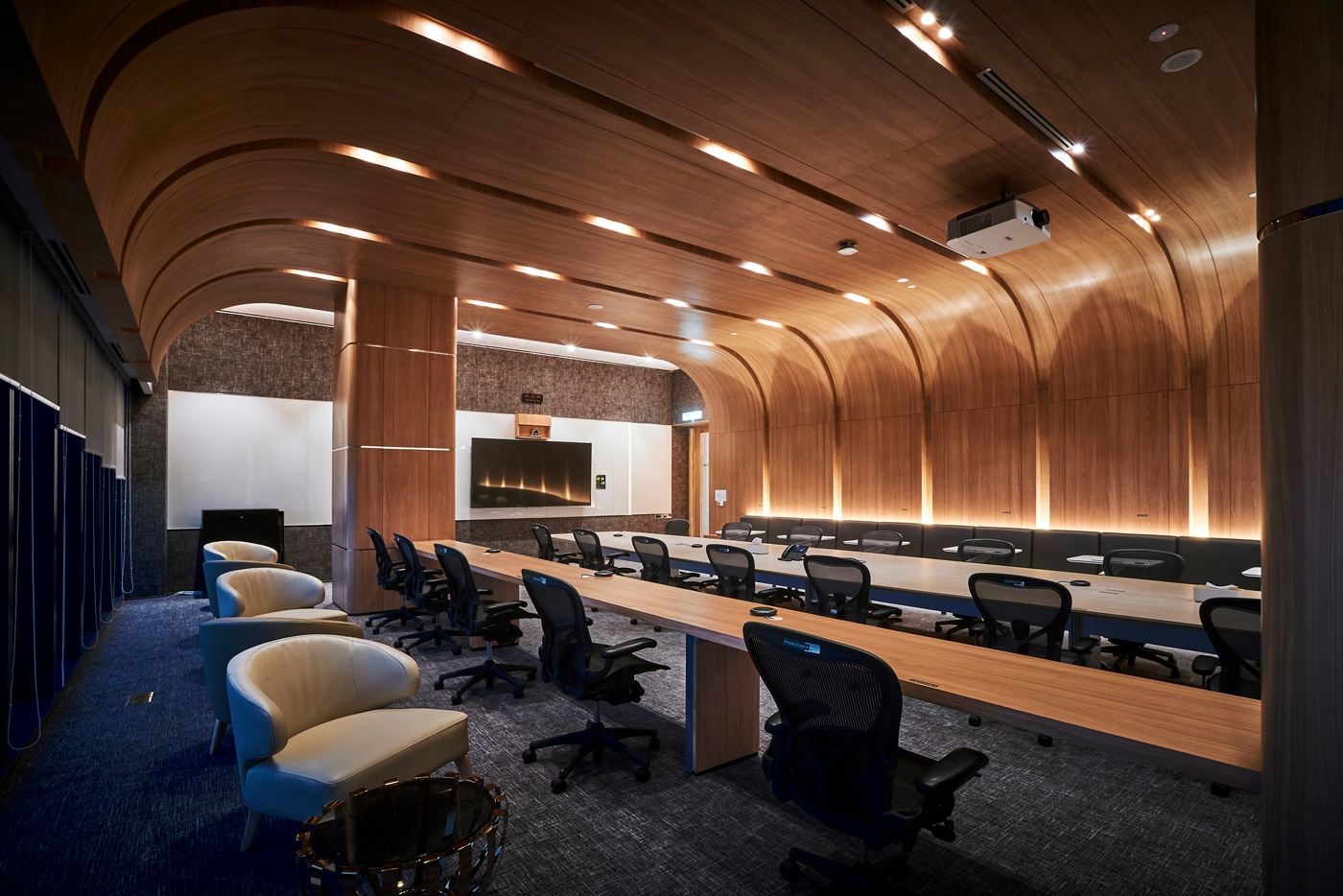