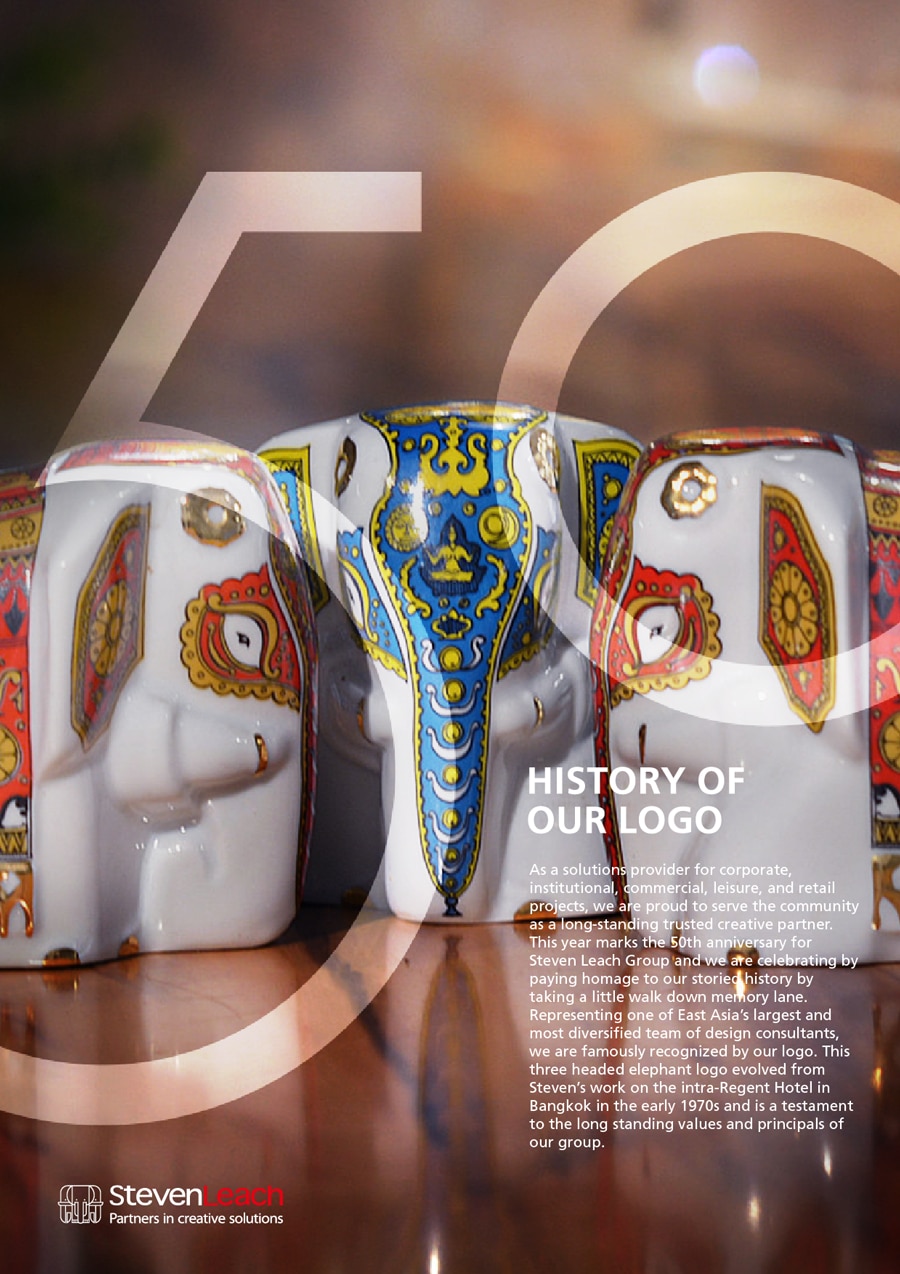 As a solutions provider for corporate, institutional, commercial, leisure, and retail projects, we are proud to serve the community as a long-standing trusted creative partner. This year marks the 50th anniversary for Steven Leach Group and we are celebrating by paying homage to our storied history by taking a little walk down memory lane. Representing one of East Asia’s largest and most diversified team of design consultants, we are famously recognized by our logo. This three headed elephant logo evolved from Steven’s work on the intra-Regent Hotel in Bangkok in the early 1970s and is a testament to the long standing values and principals of our group.

One of the most fortuitous events happened early on and influenced the branding and direction of SL+A. It was revealed that our founder Steven has been fascinated by elephants since childhood and he was encouraged to connect his passion for architecture to his love for elephants. In 1972, a Singaporean fortune teller revealed that the elephant was Steven’s lucky animal sign and the word elephant even had a similar phonetic sound to his Chinese name. Elephants represent many things: they are symbols of luck and prosperity, but also powerful beings able to use their mighty strength to remove obstacles and negative forces. Elephants are known to represent wisdom, long life, memory and vitality – an important symbol revered within many Asian cultures.

Serendipitously, Steven took a trip to Jakarta where he was inspired by the use of elephant imagery and symbolism in design aesthetics and branding. Thus, a stylized logo featuring three elephants was unveiled at the grand opening of the SL+A Manila office shortly after his trip to the Indonesian capital. This new branding and enthusiastic integration facilitated the co-operation of the three SL+A locations and represented a very exciting phase of the company moving forward. The three headed, or ERAWAN elephant is a symbol of strength and good luck in Thailand and a trusted beast of burden. Elephants are also renowned for their ability to banish bad luck and usher in a prosperous new era. The SL+A logo encompasses the hope, positivity and celebration that we intend to bring to our company and honoured partners.

In addition to the symbolism and meaning behind the elephant logo, SL+A also chose to use the color red for our main branding to demonstrate our passion in design. As a land-dwelling mammal, elephants represent the special care that our team takes when Designing Places for humans. We are inspired to bring extraordinary spaces that help people thrive in their daily lives. As we enter into the fifth decade of SL+A, the elephants symbolize our distinct emphasis on Trust, Tenacity and Teamwork. We are dedicated to design excellence and being true partners in creative solutions.